A non-gamer parent's guide to kids and online gaming

My primary schooler wants some new games for the iPad, the kind where she can meet and chat with friends.

"Roblox has got millions of cool games," she pleads, referring to the online game creation site aimed at kids.

"In any environment where people can create content, there'll be some that's explicit or upsetting," says Martin Cocker, Chief Executive of Netsafe.

"But the majority of young people that get onto a platform like Roblox or Minecraft will have a good time and won't come across it. The thing is to engage with them early and discuss what to do if they do.”

Belinda Hope is the founder of TenForward, an Auckland based after school and holiday programme which helps kids game safely.

She agrees with Cocker. 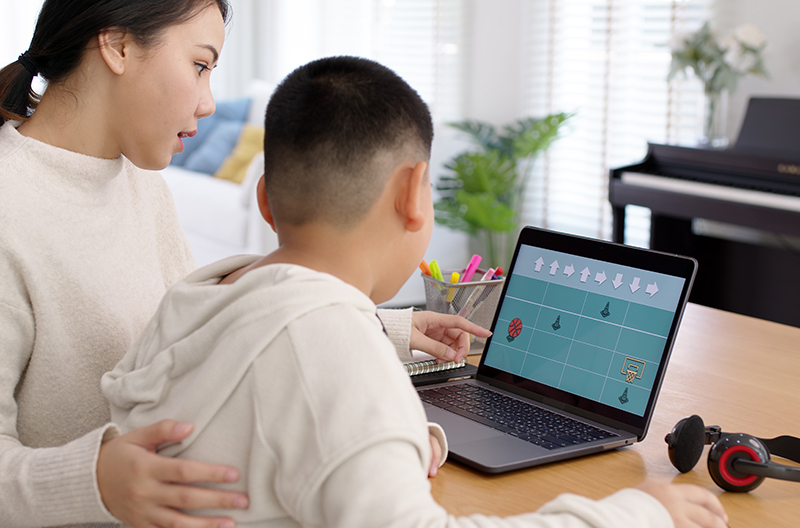 "When we grew up in an analogue childhood, we could go to the park or see our friends at school. Kids are digital natives and play online in communities with their friends. That's how they socialise," says Hope.

"A bit more education is needed to help parents understand that there are lots of positive aspects to playing online. It's about communication, friend making, teamwork. We just have to make sure it's being done in an appropriate way"

All good advice. I've decided to make gaming in general more of a family experience.

Developer Toca Boca's interesting games have taken my daughter through pre-school and early primary. Now the trick, I'm told, is to look at her real world interests to find a game that suits.

I've been checking out Beyond Blue which lets you dive beneath the waves and swim among the marine life, the incredibly popular Animal Crossing which enables you to escape to a deserted island for a spot of fishing and gardening and the Assassin's Creed Discovery Tours, which have no combat or quests, but rather a view of the ancient world.

For kids to be creators as well as consumers, Minecraft is the most well-known title, but I've heard friends talk highly about Starbound for exploring other worlds and also Dragon Quest Builders.

Lapsed gamers can also introduce their kids to some polished remakes of old favourites such as Crash Bandicoot.

Spending upfront on a good quality game can be a smart move. Games that claim to be free usually ask for money to unlock levels or encourage in-app purchases.

And never, ever ignore a game's age rating - it's there for a reason. An R18 video game is just as unsuitable for a child as any other R18 material.

Joining in with gaming

"We encourage parents to get alongside young people and play," says Cocker.

"It's a lot easier to participate in games than it is in social media and a good way for parents to understand what experiences they are having without making it obvious it's a parenting safety play.

"They'll also understand why kids find them so much fun.”

But don't stress if gaming isn't your scene.

"You don't have to be a gamer parent yourself, just a gamer ally," says Hope.

"Much like all those other social issues. Just be there to support. It might even be as limited as knowing when the new Fortnite season comes out so at least you're showing some interest in your children's interest.”

"We do social gaming so there's a group of children all physically together in a room and they can communicate more effectively than just being in their bedrooms playing by themselves. It opens up a whole new realm of social development skills."

Netsafe has strong relationships with the gaming industry, particularly Roblox, and says parents can always report any concerns.

What console is the right choice for my kid?

Gaming consoles can help make playing games more of a family activity - it's certainly better to gather around a TV than always tuck away with an tablet or smartphone.

They all also have very good parental controls, some offering settings to control screen time and purchase limits as well as content filters to block inappropriate games for kids.

For families with younger kids, Nintendo Switch or Switch Lite is a good choice. The Switch works as both a stationary console that plugs into your TV and as a portable gaming device with two built-in controllers and a touchscreen. Switch Lite is just portable. The consoles include parental controls.

For families with younger teens, a Microsoft Xbox One or Sony PlayStation 4 is probably a better option. Both have a vast array of games to choose from and parental control options.

These consoles are a little older now and can be picked up for less than $500 each.

For older teens or kids who have already been gaming for a while, it might be worth considering the Xbox Series X or the PlayStation 5. These are the latest consoles and the most expensive, but they'll be long-lasting investments you won't be nagged to upgrade for at least a few years.

Research shows there can be cognitive benefits to gaming such as improved spatial reasoning, but nobody wants their kids stuck on screens all day. Up to two hours is what the experts recommend.

"For us it's only on Fridays after school for a maximum of two hours and even then it's only Minecraft," says mum of four Zara.

"It's on a desktop PC which I walk past often.

"I do worry about the addictive nature of screens and fast paced images and interactions. How does this affect the fast paced brain development happening in our young people? What's more, If they don't have time to be bored how will they develop creativity?”

"Some of the parents we see are restricting their children so heavily they are ultimately setting themselves up to have a much lower technological ability. They don't have a lot of basic skills that you'd expect when they get to school such as how to hold a mouse or how you click on things.

"We certainly don't want to be causing that unintentionally.”

What about video game addiction?

"We don't use the word 'addiction' when it comes to gaming but there's no question that there are many people that have a problem putting games down, or getting on with other aspects of their lives," says Cocker.

"In the end it's one of those things about parenting. It's hard to make kids do what we want them to do or drag them away from things we don't want them to do."

One friend shared a tip that works for her son: for every minute he spends playing after the time limit expires, it will cost him five minutes of his next session.

She's just had to get good at keeping notes.

Netsafe says parents should check out its online safety toolkit and remember, like everything fun in life, gaming is fine, in moderation.